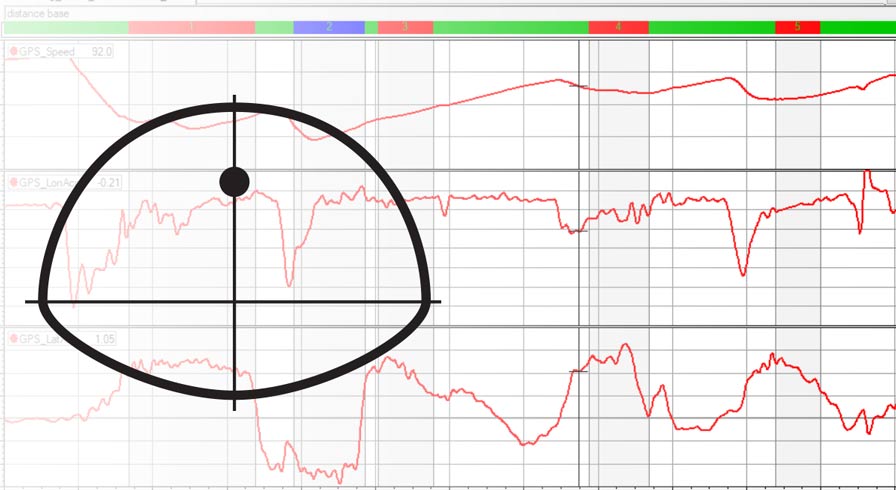 The friction circle is a visual representation of the G forces your car is capable of producing.

This Is Your Friction Circle

Wherever the weight at the bottom of the string sways when you drive is your current position on the friction circle. When your car is static the string is pointing straight down at the center of the friction circle. But when you hit the brakes, it goes forward. When you hit the brakes harder, it goes further forward. At a certain point though the weight is as far forward as it can be, and this is your maximum braking force that the car is capable of. This works the same way for cornering and acceleration with your outer most points defining the edges of the friction circle.

Your “Friction Circle” Typically Looks Like the Image Below.

(G) is one of the three variables that the driver has control over for a better lap time. (Radius (R) and Distance (D) being the others.) Everything we talk about in this article will be concerning the G variable of the driving equation.

Defining the Outer Limits Of The Circle

In the cases of braking and cornering the outer limit of the circle will be defined by when the tires produce their most grip. If you’re on a DOT street tire, this will be somewhere just after they start squealing. They actually produce their highest grip at a specific slip angle that varies tire to tire.

Knowing about slip angle is important. Here’s why.

The Tire Produces the Most G at a Specific Slip Angle.

In order to maximize G we must essentially slide the tire a little but not a lot.

Now if we think about how to define the outer limits of the friction circle under acceleration we want to think about what will make that string that’s hanging from the mirror go as far back as possible, creating the most G possible.

The Limiting Factor Here is Typically the Horsepower of the Car and Not the Traction of the Car.

Unless you can get wheelspin down an entire straight away you are limited by the power of the engine and not the traction of the tire.

Some people define the acceleration limits of the friction circle by the amount the tires could theoretically grip given the horsepower, but I find using overall possible G given the car you’re in as a better method of measure when evaluating driver performance.

“If you can leave two black stripes from the exit of one corner to the braking zone of the next, you have enough horsepower.” – Mark Donohue

Our goal as racing drivers is to keep that string on this outer edge of the friction circle at all times. If we can do this successfully we are maximizing the (G) that the car is capable of and are driving the car at it’s limit.

If we drive under the car’s limit we are simply not leaning on the car hard enough and the string will not follow the very outer most edge that it could. Likewise, if we over drive the car and slide the tires too much the string will be pretty far out but not at its outer most point that it could be. All the driver had to do in this case was slow down and allow the tire to grip more, get the tire in its optimal slip angle range, maximize G and push that string to its outer most point.

The Shape and Size of a Friction Circle is Not the Same Car to Car.

The shape depends on what type of car you drive. A high horsepower American muscle car has a very different looking friction circle than a low horsepower Spec Miata.

The shape and size of the friction circle also changes every square foot of pavement you drive over in real time. Thing such as bumps, pavement changes, elevation changes or fluids on the track for example can change it dramatically and in an instant.

Driving in the wet makes your friction circle much smaller, but it also dramatically changes the shape of it as well. It doesn’t lose traction in a linear fashion comparing longitudinally/laterally.

You can see an example of friction circles organized by car type and track conditions by downloading the PDF guide below.

In the very most simple of terms, here is an example of what happens to your friction circle when you are on dry pavement but then suddenly hit a patch of water.

Let’s say you were producing .7 Gs out of the car and then suddenly kept asking for .7 Gs even when you hit a wet patch. You went over the limit of the car because the friction circle changed size out from under you. Looking at the picture above, you can see the same .7 Gs is now outside the friction circle when it changed size as you hit the wet patch. You didn’t do  anything abrupt or wrong per-se.

In this case, either the front, rear (or both) ends of the car will seek a larger radius and hopefully there isn’t a wall in the way. The radius WILL ALWAYS BE what the speed dictates, 100% of the time.

If Your Friction Circle Suddenly Shrinks, You’d Better be Prepared for it.

An example of this would be having a “4 off” into the grass. The physics of the car are still the same in the grass, your friction circle just gets smaller. Therefore, you must obey the physics and only point the tire in a direction close to the one it’s traveling in order to get the car to even think about turning. Think about keeping the tire in its optimum slip angle range (this is pretty difficult mentally to do in the grass!) Where people run into trouble here is they turn more and more, creating a gigantic slip angle where the tire surely isn’t going to grip. They run into even more trouble entering the race track again with the wheels turned too much and hook spin back to the inside!

Always Drive Within the Context Of Your Friction Circle

Sometimes we’ll hit a patch of antifreeze that we didn’t see at full speed. Out of nowhere we’ll be way over the limits of our friction circle and we must drive within the context of our new circle. Remember, the car will seek the radius the speed dictates regardless of what we ask the car to do at this point.

If G is Very Low this Radius Will Be Very Straight.

In this situation, you’d ease back gently on your speed, let go of the pedals, straighten up your hands, think about your friction circle with your eyes on your intended path, and hope there’s not a wall in the way! You can only maximize what the car will do.

If You Can Develop a Thorough Understanding of Your Friction Circles And Know How To Monitor And Adjust, You’ll Be Miles Ahead of the Rest.

Tie a piece of string to your mirror and enjoy!

The iRacing Conundrum: Faster in the Sim or Faster in Real Life?

Driving Principles of Racing In The Rain

All You Need to Know on Correcting Oversteer