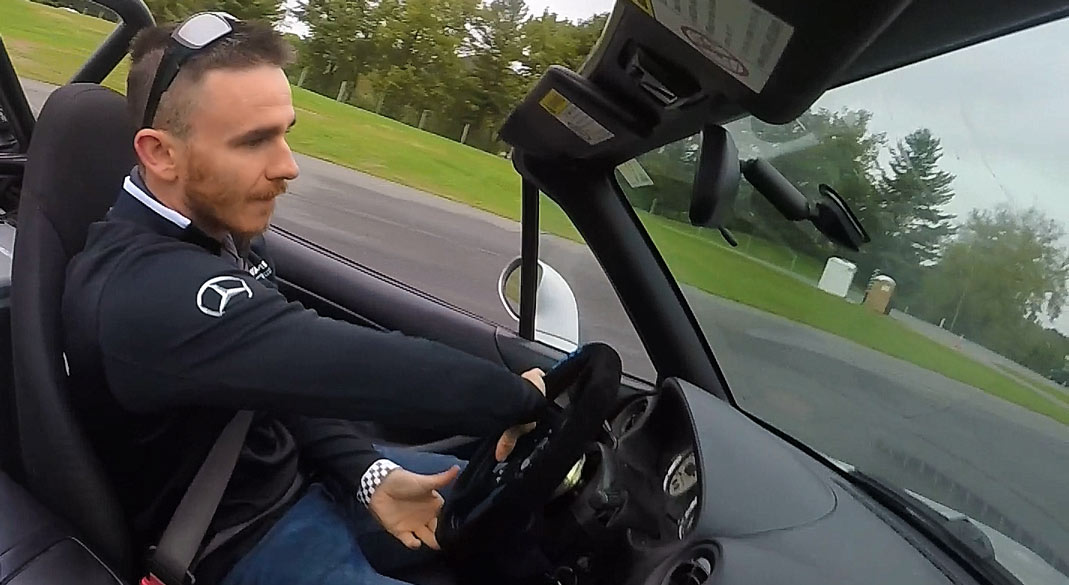 As blunt as it is, this actually makes a great deal of sense when explained to a completely new track driver.

From a technical standpoint, I define oversteer as this:

Oversteer – Any time the rear tires are seeking a bigger radius than the fronts.

To put more simply, the rear tires start to skid before the fronts.

Oversteer is a problem to the performance driver because if left uncorrected it can result in a complete loss of control and potentially a big crash.

If managed properly, oversteer is very correctable. Some drivers even prefer a little bit of it in the quest to get a nice, balanced car.

In order to be comfortable with oversteer the performance driver must understand what it is, why it happens and how to correct it.

That, and have plenty of experience doing it. 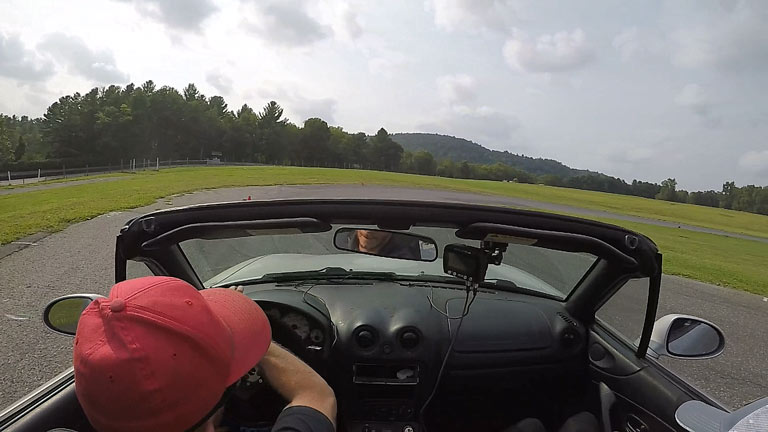 An oversteering car is never out of control.

Oversteer just means the driver must allow the fronts to travel a bigger radius, just like the rears are, so that the car doesn’t continue to rotate. Remember, the only reason a car rotates is because the front is turning on a tighter radius than the rears are.

If the driver can compensate for this by asking for less steering once oversteer starts, the fronts will join a more similar radius of the rears and the rotation of the car will slow and/or stop.  The rotation of the car at this point would be the proportional difference in radius between the front and rear tires.

What This Really Means…

If the driver can successfully steer where they want to go throughout an oversteer skid, they have done the following 3 steps successfully:

This is where you “turn into the skid,” steering in the direction that the car is sliding towards. The correction wants to be added at the same rate the car rotates (which is usually pretty quick.) The amount of correction that should be added is the amount that the car “gets sideways,” keeping the front tires pointed on your intended path.

When enough correction is added and it’s done so in a timely fashion, the rotation of the car will slow or stop proportionally to the difference between the radius that the rear is traveling versus the front. This cessation of rotation is called the “pause” and it’s critical the performance driver recognizes this moment. At this point, no further correction wants to be added and the driver will keep this steering angle until the end of the pause/beginning of the recovery. (This will happen QUICK!) Doing so will ensure the front tires remain pointed on their intended path.

The recovery is when the rear tires are now able to regain grip, the rotation has stopped and the car is coming back straight again. Since the rear is now gripping again, the car will no longer stay sideways and will “straighten out” VERY quickly. In order to keep the front tires pointed on the intended path, the driver must undo the steering (that was used for the correction) at the same rate that the car is coming back straight again.

This process called CPR (Correct, Pause, Recover) is simply done in order to compensate for the rotational angle of the car, keeping those front tires pointed in the same direction the centerline of the car is actually traveling on.

This is because the front and rear axles travel different radii during oversteer skids.

Notice how I didn’t stray one bit from the concept of simply keeping your front tires pointed where you want to go at all times? It’s because managing oversteer is literally that simple.

As I mentioned before, an oversteering car is never out of control.

When the rear tires lose grip they simply seek a bigger radius. The difference in radius between the front and rear causes the rotation. As a result, the driver must react by simply asking the front of the car to turn less, initiating the correction process.

Look at how the front tires are always pointed wherever the centerline of the vehicle is traveling on, regardless of the rotational angle of the car. This is what I mean by “keeping the front tires pointed on the intended path.”

It’s important to note that the driver is the one who does the correction and the recovery, but the car is the one that does the pause. It’s the performance drive’s job to IDENTIFY and REACT to the pause, but they have very little influence on when/if it actually happens.

Footwork During the C.P.R Process

We’ve gone through what to do with your hands during an oversteer skid, but what should you be doing with your feet?

It mostly depends on which wheels are your drive wheels. The load transfer will always be the same regardless of what “drive” your car is. But the way the car responds to throttle during an oversteer skid is the big difference.

During and oversteer skid in a front wheel drive car, it can actually be beneficial to go to some throttle. This sounds counter intuitive, but think about it this way. Imagine the trailer of a semi-truck getting sideways while the cab stays straight. If the truck driver went to the brakes, the momentum of the trailer would push against the cab and further jackknife the rear around.

In a FWD car it works fairly similar.

If we go to throttle during an oversteer skid, we are “pulling” the car straight again and the “trailer” (rear of the car) has no choice but to straighten out.

Granted a car doesn’t have a hinge in the middle separating the truck and trailer, but the concept still works the same way.

In a rear wheel drive car, things are a little bit more traditional. “When in doubt- both feet out” (origin of quote unknown) is a good rule of thumb to follow. If you think about it, adding any power to the rear tires could create wheelspin, making the oversteer worse. And any slowing down will shift load toward the front of the car making the rear more unstable.

In some scenarios, going to a little (and I mean A LITTLE) power, say less than 5% throttle can help the rear regain traction a little sooner IF there is grip in the tire that can be put to the road. This would create a slight load transfer toward the rear of the car, balancing out the platform of the car and helping it regain grip.

This is an advanced technique and only works if executed properly.

An oversteering AWD car is a whole different animal. What you should do with your footwork during an oversteer skid largely depends on the power bias of the car. That is, what percentage of power is delivered to which end of the car.

In both AWD scenarios however, expect the car to actually gain speed and momentum when you are on power during an oversteer skid.

Because the torque is distributed between 4 contact patches as oppose to 2, the power is more likely going to be delivered to the road regardless of the effect it has on the rotational angle of the car.

Eye-work During An Oversteer Skid

If you haven’t already, be sure to check out my article Improve Your Eye Work in 90 Seconds which discusses basic eye work skills.

During an oversteer skid, much like where you point your front tires, your eyes should always be looking well ahead on your intended path. It’s all too easy to let your eyes wander to what your sliding at instead of where you actually want to go.

To see a diagram of the correct eyework throughout the oversteer process, download the PDF below.

CORRECT EYEWORK THROUGH THE OVERSTEER PROCESS

Let me ask you this.

If you lost control of your car and were sliding off of the road towards a tree, where would you probably look? I bet you know where I’m going with this. You probably looked at the tree, and when you did, you helped yourself hit it.

Our natural fight/flight response wires us to focus in on danger, in this case the tree.

With panic usually comes full braking and ridiculous steering input that the car obviously won’t do in a desperate attempt to not crash.

But you know what looking up, far down the race track on your intended path does?

It encourages the driver to “see the light at the end of the tunnel,” roll off the brake and simply steer the car out of the way.

As silly as it sounds, if we look at the tree, we have already programmed our mind to “slow down before impact” rather than “let’s steer around this.”

And 9/10 times this is why people crash in oversteer skids.

Oversteer shouldn’t be complicated. At the end of the day, if you can simply always look and steer where you want to go, you’ll manage oversteer like a pro.

It’s simply steering where you want to go.

Knowing How To Go Slow Is The Secret To Going Fast